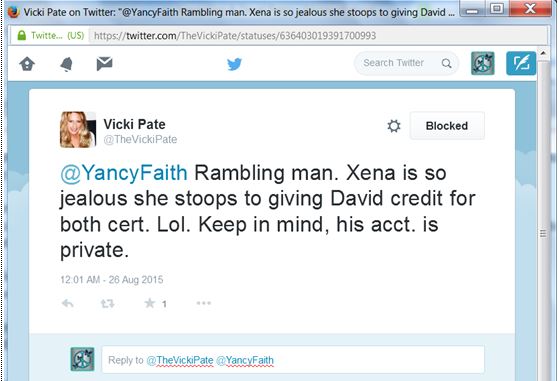 I don’t often respond to false accusations, but this matter involves an attack on Shaun King that goes beyond his activism and fund raising.  This past weekend, I tweeted a link to information that while Vicki Pate is the source for obtaining Shaun King’s birth certificate, that David Piercy is the person who tweeted it out to media people.  Others on Twitter captured that link and tweeted it out.

Shaun King has written that his mom had an affair with a Black man during her marriage. David Piercy should know from experience that when a married woman gives birth, she must put her husband’s name on the birth certificate, even when she knows he is not the father.

Because Shaun King told the truth about his family, Vicki Pate now accuses him of making his mom look like a whore.

We’ve seen it over and over again. When law enforcement releases information to the media, written autopsy reports are included, but never autopsy photos. We get the drawings of a body showing wounds, but not actual photos. At trial is where the autopsy photos are shown to the jury. When those trials are live-streamed, the public seldom sees the autopsy photos because they are not nice. Medical examiners explain the autopsy. The photos are not left to the opinions of lay people.

That however, did not stop a blogger from not only obtaining autopsy photos, but also giving her opinion about what they show and challenging the mother of the dead teen to prove her wrong.

The video on the link for WCTV reports that they reached out to the blogger, but have not received a response. I urge you to watch the video. It includes an interview with Kendrick’s…