On October 17, 2016, I received notification from Automattic that Santiago Rodriguez filed  a DMCA notice against this blog.  It was for a photo that I posted on Cyberharassers Make Direct Threats To Blogger Xena – Update.   The photo is from Santiago’s Facebook page, “Diego Rodriguez” and I captioned it as such.   As of this posting, the link is still active.

On January 13, 2013, 17-year old Kendrick Johnson’s body was discovered in a gym mat in Valdosta, GA. Local authorities and a government medical examiner determined that Johnson died of “positional asphyxia” due to an accident.  They described the accident as Kendrick placing his shoes inside the gym mat and while retrieving them, he became stuck in the mat.

Thereafter, the Department of Justice opened an investigation.  In June 2016, the DOJ closed their investigation citing insufficient evidence.

During the DOJ’s investigation, two suspects were brothers Brandon and Brian Bell. Brian Bell now attends the University of Akron where he plays linebacker on the football team.

Xena has received 29 awards for blogging. The awards include 2013 blog of the year, the Harmony and Peace Award, Word Press Family Award, Very Inspiring Blogger Award, Bloggers for Peace Award, Dedicated Blogger Award for 2016, and Sisterhood of the World Bloggers Award.

These are peer to peer awards and that’s the point.   To be nominated, you have to have peers who like and respect your work.  According to her website, there are over 900 subscribed followers.  As of 10/22/2016, Xena’s gravatar profile shows that there are currently 674 Word Press bloggers who follow her blog. That’s a lot of peers. END_OF_DOCUMENT_TOKEN_TO_BE_REPLACED

Butterflies, caterpillars, moths, a certain roach, and all creatures great and small, 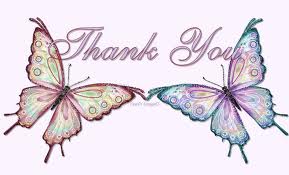 A great big thanks to subscribers, visitors and participants.  To those wanting to comment for the first time, you can  sign-in with a Facebook, Twitter, or Word Press account.  Your first comment will go into moderation.  Feel free to join in discussion.

There’s a lot of news and rather than writing separate posts, here are some summaries.

Hat tip to chuquestaquenumber1 for the following;

Forster is a high-school drop-out with a pending felony marijuana charge.  More on this at Heavy.com.

R.I.P. Officer Snyder.  Our condolences to your family…

This is in response to a tweet exchange where someone appreciated one of my blog posts, and was responded to with a tweet criticizing me for posting Soroya Fambro’s “personal information.”  The post referenced for appreciation had nothing to do with Soroya or any other particular harasser.

This is also in response to the following:

This blog post is to benefit Soroya’s attorneys so they won’t have to look far for what she purports are “violations.”

In preparation of a game, a football coach will watch videos of plays by other teams.

A professional fighter will watch videos of fights by the person they are going to compete against in the ring.

When a country is attacked, they gather intel to identity the attacker and develop plans on  how to respond.

I was attacked by Soroya Fambro, a stranger. I wanted to know who this stranger is and why…

This is a continuation of showing support for my friend, Xena, who is being viciously harassed, smeared, lied upon, and demeaned by @sofambro90 on Twitter as directed by Santiago Rodriguez.   Through Soroya Fambro, Xena is also being wrongfully accused of being someone else, which is something that Santiago has done to others.

For some history on the cyberharassers, see my post at this link.

Soroya’s knowledge of Santiago’s case in “Washington State” and defending him tells us plainly that she is being fed that information by Santiago Rodriguez.    Soroya is also taunting David Piercy (DP) with things that only Santiago would know, or that Santiago is telling Soroya to tweet for the purpose of intimidation.

END_OF_DOCUMENT_TOKEN_TO_BE_REPLACED

Since opening this blog, I’m happy to say that I’ve met some really neat people although it’s sad that the path of being victimized is the reason we met.

I’m also happy to say that there were good exchanges with people that I would not have had if not opening this blog.

I take my hat off to Michael Thacker who is the only person I originally named as a harasser who was ethical enough to apologize for his participation in harassing and doxing activities.

I also take my hat off to Rumpole.  Some might disagree with his opinions on some issues, as I do, but he never took part in the doxing, slander and harassment.  When Rumpole saw a harasser going overboard, and particularly in harassing women online, he spoke up.

Pew research statistics show that more women are harassed and stalked on the internet than men.

As of July 29, 2017, Soroya Fambro has had two Twitter accounts suspended.  We now suspect that she has been replaced by a woman named Judy who has been suspended from Twitter numerous times, but always returns to do whatever Santiago Rodriguez wants when he’s ready to open another chapter of defaming and ridiculing of Xena.

Santiago has had Soroya and the person suspected to be Judy go on a rampage on Twitter and claim that Xena’s name is “Barbara Wells.”  Because of their blog administrator-writer association, he knows the state where Xena resides.

If you go on Google and search for “Barbara Wells” “Illinois” the returns include a children’s play writer, a published author, a Unitarian minister, and a woman who filed for unemployment and appealed the decision.

Out of all of them, which person do you think Santiago choose to accuse of being Xena?   The one in the unemployment decision.   That comes as no surprise because that claim was made by people who once harassed Xena.  One of them is the man who Santiago filed for a restraining order against.   Santiago now uses that man’s accusations although for years, he claimed that the man lied about everything.

In a post that Santiago wrote in January 2015, he stated that Xena’s real name is not “Barbara Wells.”

Evidently, after Xena terminated him as a writer for her blog, Santiago changed his mind and decided to pick up the lie of those who previously harassed Xena.  That was in January, 2015 BUT WAIT FOR IT.  On July 18, 2017, Santiago tweeted that he only knows Xena as Xena.

(His Twitter handle has been partially redacted and the handle removed for the person he tweeted to.  This is because Santiago has only 3 Twitter followers and would love having attention brought to his Twitter handle.) END_OF_DOCUMENT_TOKEN_TO_BE_REPLACED

“You consistently harass me on the internet
Would you please leave me the HELL alone
You have no value, you have no class
I wish someone would diminish your A**”

At the outset, I am deeply troubled by Soroya Fambro’s recent attack on blogger Xena and her blog We Hold These Truths To Be Self-Evident.  I’ve watched for months and taken the recommendation to ignore.  There are other recommendations and one is to give emotional support to victims of internet harassment and cyberstalking.  It is time that I speak up in support of my friend, Xena.

Here’s a sample of what the harasser is doing so readers can understand why I feel the need to support my friend. Soroya’s tweets might look confusing because they are retweets of herself to herself.

September 13, 2016. Soroya apparently doesn’t like White people, or White people who advocate equal justice for all. 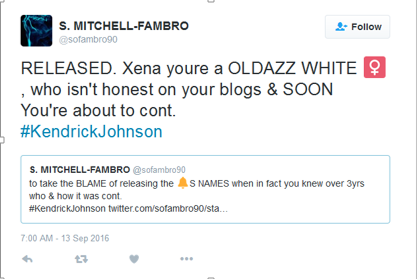 September 28, 2016.  Soroya’s comment is abusive towards the elderly and she is threatening to sue “Barbara Wells”  and then come after another person and Word Press for what Soroya describes as something she volunteered for that involves  “raping & assulting (sic) false arrest & @Walmart assault.” Soroya’s problem is that she has Xena’s name wrong.

September 29, 2016. I’m taking note of Soroya’s death threat.  Soroya Fambro aka S. Mitchell-Fambro, aka @sofambro90, has threatened to kill Xena indirectly by putting out what she believes is Xena’s personal information and intentionally, maliciously, harassing her.

The below tweet states that it is Soroya’s intent to give “Barbara Wells” who Soroya believes is Xena who is an 80 year old white woman, a heart attack. This amounts to intentional infliction of emotional distress, with such conduct being actionable in a Court of law.

It might be hard to understand with the emojis so this is the interpretation of the below.

“set that appointment with a pill heart doctor quick clock ticking party bus gonna give your dumbass a heart attack on computer. “  Soroya made that threat on September 29, 2016. END_OF_DOCUMENT_TOKEN_TO_BE_REPLACED